Pretty one (by Pierre Beaumont)

Alive (as of Act II: Shadow)

Act I: Blood (narrator)
Race for the Rails

Amelia Black is the daughter of Nathaniel Black, who inherits the Falcon Company after her father's death. Even though the company is almost bankrupt by the time Amelia takes charge of it, she continues setting rails for the United States Army under the supervision of Major Cooper.

Against the Circle of Ossus[]

When the Mexican Army attacks the fort where the US Army is staying, Amelia meets Pierre Beaumont, a French prospector who is supposedly looking for helpers in his mine whom he'll share the gold with. In truth, Beaumont is the new leader of the Circle of Ossus, long-time enemies of the Black Family. Amelia almost falls for his trap but is saved by her granduncle Ká:nien. Amelia then chases the Circle with the plan of completely destroying them.

With the help of the US Army, Amelia destroys a Circle fortress built upon the swamp that used to be the mysterious Lake of the Moon. After Beaumont kills Cooper, Amelia chases him southwards and finds herself in the middle of a major revolutionary campaign in South America, where she helps Simón Bolívar liberate several villages. Bolívar tells her about a strange rumor concerning the "Last City of the Inca", where the Circle is purportedly launching an attack. Amelia and Ká:nien make a perilous journey through the bitingly cold Andes and discover the fabled city, which they save by destroying a Circle base with the hopes of finding Beaumont, who flees to the Caribbean.

In the final battle in Havana, Amelia, Ká:nien, and the US Navy destroy the Circle of Ossus's last stand, the Ossuary. Though Beaumont survives at first, he is shot by Amelia when he tries to kill her with a knife. The Falcon Company is then saved when American troops present chests of Spanish gold that the Circle had stolen from treasure ships to Amelia and Ká:nien.

Amelia is the only other member of the Black Family to have known Morgan Black besides his wife and children. At a railway station during the end credits of the campaign, an "Old Coot" approaches Amelia and hints that he is an aged Morgan when he tells her that she has defeated the Circle "in just one lifetime." It is suggested that drinking water from the Fountain of Youth indeed extended his life well beyond what is normal.

In Age of Empires III: The WarChiefs, Amelia narrates both acts of the campaign and has a brief encounter with her son, Chayton, in one cutscene of Act II: Shadow. Here, Chayton expresses his worries about the tensions between the United States and the Sioux and wonders if his late Lakota father really were a gentle man as Amelia had told him. Amelia attempts to alleviate his fears by telling him that the Sioux are like all people: some gentle, some not.

By 1890 (when Chayton may have been killed at Wounded Knee), Amelia was still alive, suggesting that she may have, like Morgan, drunk the Fountain's water; as she was in her mid-20s during the events of the Steel campaign, which takes place in the 1820s, she was roughly 100 by then, which was considerably rarer in those days.

Amelia Black fights with a double-barreled shotgun and can use the Double-barrel Attack ability, which is similar to Sharpshooter Attack but does less damage and has a small AOE.

Like other heroes, Amelia has many hit points, but if she falls, she will collapse instead of dying and needs to regenerate enough hit points to be rescued by allies. Similar to Explorers, she can collect treasures and build Trading Posts, but cannot build Town Centers.

Major Cooper and Amelia Black on the Campaign Menu

Amelia and Ká:nien in the Definitive Edition 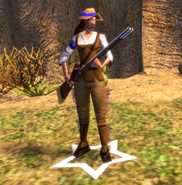 Another Amelia Render by Sam Nilson 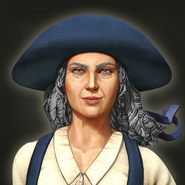