Age of Empires Series Wiki
Register
Don't have an account?
Sign In
Advertisement
in: Article stubs, Age of Empires II, Cavalry heroes, Dawn of the Dukes

5
Algirdas (1296 – May 1377, Polish: Olgierd) is a cavalry hero unit in Age of Empires II: Definitive Edition - Dawn of the Dukes. He was a ruler of medieval Lithuania. He ruled the Lithuanians and Ruthenians from 1345 to 1377. With the help of his brother Kestutis, he created an empire stretching from the present Baltic states to the Black Sea and to within 80 Kilometres of Moscow. As a hero, he cannot be converted and can regenerate health.

He and his brother share the campaign Algirdas and Kestutis. The campaign is narrated by Algirdas' son, Jogaila, who is the protagonist in the last scenario and has his own campaign, which he shares with his wife Jadwiga. 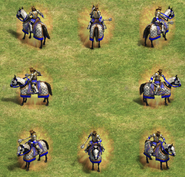 Many views of Algirdas

Algirdas (left) as seen in the expansion's official art