Age of Empires Series Wiki
Register
Don't have an account?
Sign In
Advertisement
in: Age of Empires II, Cheat units, Cavalry,
and 2 more

6
Alfred the Alpaca is a cheat unit in Age of Empires II HD: The Forgotten. It is also available in the Scenario Editor.

Alfred the Alpaca has similar appearance to a Llama, but is smaller, without saddle, wearing a golden crown and has the ability to speak. He moves at moderate speed (comparable to most infantry) and attacks by headbutting the target. Because he has very high armor and trample damage, Alfred is nearly invincible in melee combat against any unit. However, Alfred struggles against fast ranged units utilizing hit-and-run tactics because it lacks speed and ranged attack. Alfred is also vulnerable to Castles and Bombard Towers. His abilities are very comparable to another cheat unit called Furious the Monkey Boy in that most of the attributes of the latter, are actually the same as Alfred's. There's only one difference to note, that is the aforementioned trample damage from Alfred, where as Furious does not have that ability, but otherwise they are very comparable due to the fact they can easily one shot everything in their path.

When ordered to move 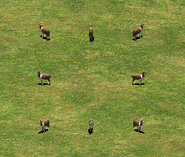 A group of Alfred the Alpacas 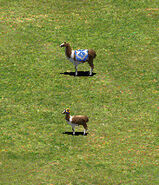