Age of Empires Series Wiki
Register
Don't have an account?
Sign In
Advertisement
in: Maps, Age of Mythology

Alfheim is a random map in Age of Mythology. It is based on the Norse land of the Light Elves.

Alfheim is a mixed map that provides some benefits to offensive, defensive and economic gods, especially to defensive ones. There are no bodies of water to slow down players who focus on the rush strategy but there are cliffs to aid defensive players in walling off areas (though not as efficiently as the Jotunheim map). Forests here only appear in small pockets but there are plenty of them to further aid with blocking off attacks. There is an abundance of food and Gold Mines evenly scattered across the land and easily accessible.

The most notable feature of Alfheim is the high number of Relics found. It’s not uncommon for players to be able to capture enough of them to fill their Temple. Major gods that benefit the most from this include Loki, Fu Xi, and all three Greek gods.

Worshipers of Kronos also have a unique advantage on this map as they are able to timeshift buildings onto the cliffs who occasionally have patches of grass at their peak. As most units cannot move above cliff terrain, this leaves defensive structures out of harms way while still being able to defend an area. Similarly, Isis and Ra players can utilize Rocs to transport Laborers on said cliffs, to construct buildings, or even Petsuchoses, that can harass nearby units.

This Norse map provides plenty of food with many safe options to choose from at the beginning of the game, including Cows, Berry Bushes, Deer, and Chickens. There are also Aurochs located further away from the starting Town Centers, and it is also possible to encounter Caribou herds.

Alfheim is especially dangerous for worker units as there are lots of Wolf packs found between the cliffs, and there is also a high chance for Brown Bears to appear in pairs, usually close to ruins and Relics.

The terrain is decorated with ruins, though they are of Greek design rather than Norse. Trees present are palm tree forests, which due to the unique, eerie lightning of Alfheim appear darker than average. 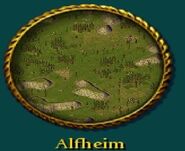