Cavalry
Alaric the Goth is a cavalry hero in Age of Empires II: Definitive Edition. He has a unique appearance similar to a caped Huskarl riding a horse. As a hero, he cannot be converted and can regenerate health.

Alaric the Goth was present at one point in the scenario The Giant Falls of the reworked Alaric campaign, presumably in substitution of Kushluk who had stood for Alaric in The Sack of Rome (the Forgotten scenario it was edited from). However, he was controlled by Ataulf instead of the player or the Visigoths (equivalent to the Goths in The Sack of Rome, who controlled Kushluk/Alaric in The Forgotten). This was possibly a mistake, as Alaric was replaced by Ataulf's own unit after updates. Since then, Alaric the Goth does not appear in the campaign and is only available in the Scenario Editor.

Alaric shares his portrait icon with Ataulf and Theodoric the Goth (in the Definitive Edition). In the Battle Royale game mode, Alaric is one of two starting hero units for the player, the other being Attila the Hun. 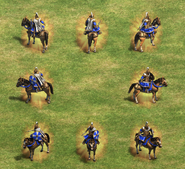 Multiple views of the unit.
Community content is available under CC-BY-SA unless otherwise noted.
Advertisement