Age of Empires Series Wiki
Register
Don't have an account?
Sign In
Advertisement
in: Age of Empires III, Foes, Knights of St. John,
and 3 more

Richard Doyle
Alain Magnan is the commander of the Knights of St. John and also the superior of a fellow knight, Morgan Black.

During the Siege of Malta, Alain led a cavalry march when a signal fire was lit, saving Morgan and the fort he was defending. Following a small battle to push the last of the Ottomans from Malta, Alain presented Morgan with his own Flagship and sent him to the New World. Once there he sought out information on The Fountain of Youth and waged a campaign against the Spanish, who were also seeking the fountain. Soon Morgan and his newly formed allies, Elisabet Ramsey and Sahin cleared the way to fight the Circle of Ossus and discovered that Alain was the acting commander of the secret society. During the battle at the Fountain of Youth, Alain was killed, but the crippled Circle lived on to fight another day.

Alain is primarily featured in Act I: Blood in the beginning and towards the end.

Hero (except in The Fountain of Youth?)
Cavalry

Knights of St. John (Breakout and Into the Caves, hero version)

Circle of Ossus (The Fountain of Youth?, non-hero version)

Alain fights with his sword and rides his horse in combat.

If the hero version of Alain falls, he will collapse instead of dying and need to regenerate enough hit points to be rescued by allies. Unlike Explorers, he can neither collect treasures nor build Trading Posts and Town Centers, and has no special abilities.

The non-hero version of Alain is more powerful, having 3,500 hit points, a whopping 75% resistance to ranged damage, and does twice the damage, but does not regenerate hit points, has a slightly lower speed, and will die instead of collapsing when he falls. 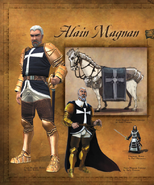