Jalal-ud-Din Muhammad Akbar or Akbar the Great (1542-1605) was the third Mughal Emperor of India, ruling from 1556 to 1605. He is the AI personality of the Indians in skirmish mode and is voiced by Rizwan Manji.

Akbar was a Muslim ruler born in the house of Timur. He was known for his patronage of the arts and his religious tolerance, tripling his empire's size over the course of his reign.

Akbar's military tends to be of mediocre size and ability. He will make a few light raids during the Colonial Age, usually comprised of a mixture of Sepoy and Rajput heavy infantry. During the Fortress Age, Akbar will create armies that are largely comprised of Sowars supported by Zamburaks, with Gurkhas replacing his heavy infantry. Akbar will rarely ever train elephant units of any type, aside from those that are deployed by Home City shipments. He will also heavily recruit soldiers from the consulate and maintain a sizeable navy where possible. Akbar can become somewhat powerful when part of a team, but often fails on his own due to his over-reliance on Sowars and ranged infantry which are generally inferior to artillery and other high-end units.

Akbar maintains an average economy, advancing ages at a rate typical to other skirmish AIs such as Queen Elizabeth or Napoleon Bonaparte. He will generally attempt to build Rice Paddies adjacent to his Town Centers, with layered military structures such as Castles, Barracks, and Caravanserais protecting them. 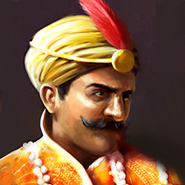 In-game avatar
Add a photo to this gallery

Wikipedia has an article about:
Akbar the Great
Retrieved from "https://ageofempires.fandom.com/wiki/Akbar_the_Great?oldid=322063"
Community content is available under CC-BY-SA unless otherwise noted.