Ajax is the Archaic Age hero for Hades in Age of Mythology. He also appears in the Fall of the Trident and The New Atlantis campaigns. The stats to the right are for the non-campaign Ajax, who lacks a Shield Bash attack, the ability to be revived and is slightly weaker. 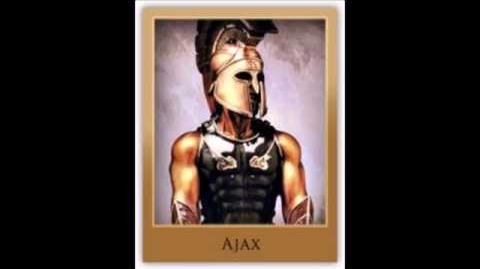 Myth units (1.5)
In the campaigns, Ajax has substantially boosted hit points. He also has a shield bash special attack that knocks enemy foot soldiers back a short distance and deals 60 hack damage. Like other campaign heroes, he regenerates and cannot be killed; he will merely faint if his HP is reduced to 1. He can be revived if approached by friendly units.

In the Fall of the Trident campaign, he meets Arkantos during the Trojan War (it is implied that they already know each other) and accompanies him to Ioklos afterwards. Ajax is typically the "brawn" of the team, not being much of a strategist but a hardy fighter nonetheless.

In the The New Atlantis campaign Ajax, soon to be crowned King of Salamis, leads a company of Greek troops to confront Kastor and the Atlanteans in response to their unexplained attack on Sikyos. However, he joins Kastor after realizing that they had been tricked by Kronos' servant.

Ajax in Fall of the Trident

Ajax in The New Atlantis

Wikipedia has an article about:
Ajax
Community content is available under CC-BY-SA unless otherwise noted.
Advertisement