Age of Empires Series Wiki
Register
Don't have an account?
Sign In
Advertisement
in: Age of Empires II, The Forgotten, Expansion packs
English

The Forgotten includes seven new campaigns. Those are:

Like The Conquerors, this expansion features five additional playable civilizations:

Patch 3.1
The introduction of The Forgotten came with a host of changes to the game, with the game version being incremented from 2.8 to 3.0. Some of the changes included in this new game version affect only those in possession of the expansion (content additions and balance changes) while others (bugfixes and UI improvements) affect all players equally; the former are included in the official patch notes of version 3.0 linked in the infobox.

There was a small hotfix addressing some minor bugs associated with the release of this patch:

Although there are no official reviews, Age of Empires II HD was well-received by the Steam community, where it has a rating of 9/10.

Most reviews praised the 5 new civilizations, new technologies, fixes, random maps and the design of the campaigns (eyecandy) and some of its content.

However, the new AI and campaigns content were considered "bad", with the AI being called "dumbed down" and not as good as the Conquerors' AI. The campaigns were attacked for leaving the build and destroy style, for a "Fixed Force" or "Regicide with a Hero" (used in many fanmade scenarios) along with units being stuck in eyecandy, being too hard, and "not allowing you to play/unskippable cutscenes". 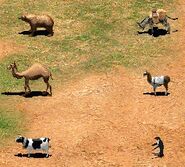 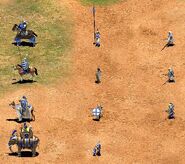 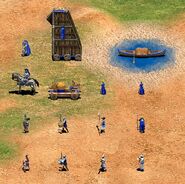