Age of Empires II HD: Rise of the Rajas

December 19, 2016
Age of Empires II HD: Rise of the Rajas is the fourth expansion for Age of Empires II: The Age of Kings. It adds four new civilizations and campaigns set in the Southeast Asia region.

The third expansion developed by Skybox Labs and Forgotten Empires, it was released December 19, 2016.[1]

There are four new campaigns in Rise of the Rajas, one for each of the new civilizations.

Like The African Kingdoms, this expansion adds four new civilizations, each of which share the new Southeast Asian Architecture type.

Rise of the Rajas also features new Scenario Editor objects (for example, statues of Buddha) and unique Southeast Asian terrains for the new maps (including rainforests and mangrove forests). Among them, a new type of amphibious terrain is featured on the new maps, where structures can be built on and that both land and naval units can traverse, providing a new and unique playstyle as naval and land units can easily clash with each other.

5.1
Changes applied in the expansion:[2]

Rise of the Rajas was first announced by Forgotten Empires on their official website at December 13, 2016.[3] To celebrate the launch of the new expansion, a mini-tournament called Battle for Angkor was held on December 17–18. The tournament featured eight expert players who used the new civilizations and was broadcast on Twitch.[4] 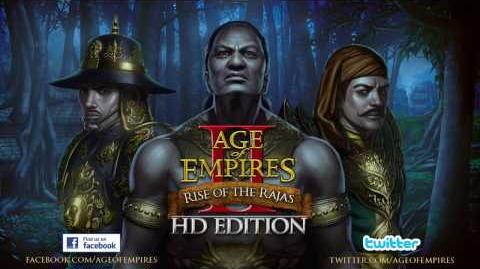 Full promotional artwork
Add a photo to this gallery

Retrieved from "https://ageofempires.fandom.com/wiki/Age_of_Empires_II_HD:_Rise_of_the_Rajas?oldid=303881"
Community content is available under CC-BY-SA unless otherwise noted.