The expansion's launch coincided with the release of update 38254 that introduced new features, bug fixes and balance changes.

Artwork of the The African Royals expansion

A map created from the random map loading screens, featuring the maps added in the expansion release 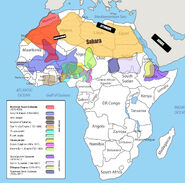 Check the comment on the image for further information.

European colonization of the continent before the Scramble of Africa, 1800. Map by Khey Pard