The WarChiefs
The Asian Dynasties
Definitive Edition
DE: The African Royals
DE: Knights of the Mediterranean
Age of Empires III is a real-time strategy game developed by Ensemble Studios and published by Microsoft Game Studios. It is the third title in the Age of Empires series and the PC version was released on October 18, 2005.

A remastered version with the previous expansions and two new civilizations was announced on August 21, 2017 and was released on October 15, 2020.

The game is set where Age of Empires II left off with the discovery of the New World and the beginning of colonial times between the 1500s to the year 1850. Age of Empires III follows in the style of the previous games of the series, with the player taking a European colony from a small settlement into a powerful empire. The player also progresses through five 'Ages', a system of tiered advancement in which each tier offers increasingly powerful units and upgrades.

The player starts the game with a Town Center, an Explorer, and several Settlers or only a Covered Wagon and an Explorer depending on the type of game selected. Unlike the other Age of Empires games, this game includes much prominent gunpowder warfare, including artillery and rifle companies. When the game starts the exact terrain of the map which includes, the position of the enemy, native tribes, and trade post sites are blacked out. If the player has teammates, they and the land they visit are visible. Players must explore the map and begin gathering the natural resources, food, coin, or wood which are used to train more units, create more buildings, and upgrade their technology. The actions such as training units, constructing buildings, and killing enemy units can give the player experience points. When the experience points reach a certain threshold the players earn shipment cards that can be shipped from the Home City to the player. Then as their economy and military improves they can destroy the enemy colonies or the enemy may offer to resign (if allowed).

As with most RTS games, the player can advance through technological phases, which provide access to greater improvements, units, or buildings. In Age of Empires III, these phases are called "Ages", and represent historical time periods. Before advancing, the player must choose a politician and each can provide free units or crates of resources. They are five: the Exploration Age, which represents the discovery and exploration of the Americas by Europeans and allows the player to explore and develop their economy; the Commerce Age, which represents the European Expansion into the "New World" and unlocks early military units; the Fortress Age, which represents the fortification of the European colonies, unlocks forts, and allows the player to have a more complete military; the Industrial Age, which triggers a strong economy, due in part to factories—advanced buildings that produce resources or artillery—and unlocks all units and cards; and the Imperial Age, which unlocks all buildings and upgrades.

Similar to the Age of Mythology's minor gods, Age of Empires III utilizes a Politician System as a method of granting bonuses on a successful advancement to another age. When a player chooses to advance to the next age, they are given the choice of two or more politicians. When the player selects a politician, they are granted a bonus along with the age advancement. The politician is given a generalized title from the period that reflects the bonus that it gives (for example, "The Naturalist" gives a reward of four cows). As the player's Home City increases in level, more politicians are unlocked at a rate of one every ten levels.

Age of Empires III allows the player to play as eight different civilizations:

Note that these are just some of the greater changes between the different civilizations. There are other civilizations playable via the campaign, which include: the Knights of St. John, John Black's Mercenaries, and the Falcon Railroad Company (United States) (which are played as the Spanish, German and British civilizations, respectively, with slight modifications. Non-playable campaign civilizations include the Pirates, the Circle of Ossus, and the Native Americans, although these civilizations are playable using the Scenario Editor.

Twelve different tribes of Native Americans are in the game as well; these are not playable factions. However, players can gain access to unique units and improvements by forming an alliance with the tribes by building a Trading Post at their camps. Three of these tribes were made playable in the expansion pack Age of Empires III: The WarChiefs: the Iroquois, the Sioux, and the Aztecs.

Age of Empires III features various competing schools of strategy. These are usually conflicting opposites, such as the ideas of massing large amounts of non-upgraded units versus small amounts of expensive upgraded units. These strategies differ between each AI, and when playing online, one can expect to come across various different styles of play.

They are primarily divided into three main categories.

The base game came with a three part campaign, consisting of Act I: Blood, Act II: Ice, and Act III: Steel. It concerns different generations of the Black family (including Morgan, John, and Amelia) and follows them through major periods through the history of the New World.

Multiplayer matches can be played through the bundled Ensemble Studios Online (ESO) application or via a direct LAN or IP connection. On a Mac, a player must Gameranger(free) or LAN to play multiplayer.

Age of Empires III includes a free multiplayer account on ESO. Similar in function to Blizzard Entertainment's Battle.net, ESO allows players to play matches and chat with other players. Each copy of the game supports one ESO account.

On ESO, the player may establish Home Cities, as in single player, and is given the default military rank of Conscript. As the player defeats others in multiplayer battles, they can be promoted, gradually earning higher ranks. This ranking system is based on a "power rating" system that determines rank based on the difficulty of matches and activity in the game; for instance, more points are awarded for beating a player with a higher-level Home City than the victor. Likewise, more points are deducted for losing to a player with a lower rank.

Unlike the previous two installments, Age of Empires III does not include a campaign editor which allows a user to create their own custom campaigns to play or share online with friends. Instead, it allows the user to make their own scenarios/maps mirroring the same engine from Age of Mythology, by creating their own unique maps with cinematics, triggers, and scripts, while also still allowing the user to test their units while in edit mode. 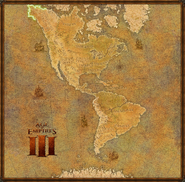 A map created from all random map loading screens, after the The WarChiefs expansion.