28 April 2022
Age of Empires II: Definitive Edition - Dynasties of India is the third expansion for Age of Empires II: Definitive Edition. Unlike the previous two expansions, it features three new civilizations (Bengalis, Dravidians, and Gurjaras) instead of two, a reworking of an existing civilization (see below) in addition to three new campaigns for the Bengalis, Dravidians, and Tatars/Hindustanis.

The expansion's accompanying update reworks the existing Indian civilization to Hindustanis, and was implemented with update 61321.

There are three new campaigns in Dynasties of India:

This expansion adds three new civilizations with the South Asian architecture set and reworks the existing Indians as Hindustanis. 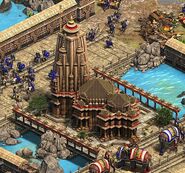