It features a fully remastered soundtrack, multiple quality of life improvements, significant graphical upgrades, and includes The Last Khans, an expansion that adds four new civilizations based on Central Asia and Eastern Europe (the Bulgarians, the Cumans, the Lithuanians, and the Tatars), and four new campaigns (for Tatars, Cumans, Bulgarians, and Incas, replacing El Dorado). It also includes the Enhanced Graphics Pack that increases the Definitive Edition to ultra-high fidelity resolution.

On December 15, 2020, a new expansion was announced, Lords of the West. It features two new civilizations based on historical kingdoms of western Europe (the Burgundians and the Sicilians), three new campaigns (for Burgundians, Sicilians, and Britons) and new achievements. It was released on January 26, 2021.

On April 13, 2021, the second expansion was announced, Dawn of the Dukes. It features two new civilizations from Central and Eastern Europe (the Bohemians and the Poles), three new campaigns (for Poles, Bohemians, and Lithuanians) and new achievements. It was released on August 10, 2021. In addition, new cooperative campaigns and Historical Battles were announced and have been gradually added since July 6, 2021.

On April 14, 2022, the third expansion was announced, Dynasties of India. It features three new civilizations from South Asia (the Bengalis, Dravidians, and Gurjaras), a reworking of the existing Indians civilization (being renamed to Hindustanis, with a new unique unit and unique building, as well new bonuses), three new campaigns (for Bengalis, Dravidians, and Tatars/Hindustani) and new achievements. It was released on April 28, 2022.

Like The African Kingdoms and Rise of the Rajas, this expansion adds four new civilizations from the same general geographical area. 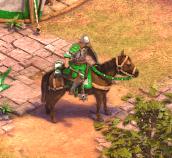 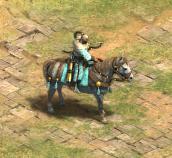 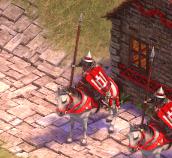 The full background of the main menu


Example of the new extended civilization theme, for the Malays.