This campaign is based on the real life of Nana Sahib in the times of 'Sepoy Rebellion' or 'First War for Independence' occurred in India. The character is also inspired by Mangal Pandey.

Fighting for the British[]

Scenario 1- Into the Punjab 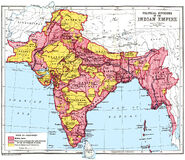 Historic map of the British Raj, with provinces in pink and princely states in yellow

A historic painting entailing of the Sepoy Rebellion of 1857