Age of Empires Series Wiki
Register
Don't have an account?
Sign In
Advertisement
in: Age of Empires III, Act I: Japan, The Asian Dynasties

The Japanese campaign focuses on the unification of Japan, which was also a scenario in Age of Empires II: The Conquerors, the establishment of the Shogunate, and a young general named Sakuma Kichiro.

The campaign begins when Kichiro meets up with Daimyo Torii Mototada at the siege of Osaka to capture the 5-year-old heir of Toyotomi Hideyoshi. Kichiro and Mototada ally with the local villagers and storm the castle. Next, they move to the north-east of Honshu to destroy any villages that might support Tokugawa's enemy Uesugi Kagekatsu and defeat Uesugi's army. After the victory, in which they suffer heavy losses, Mototada learns that Shogun Tokugawa's main enemy, Ishida Mitsunari, is threatening Mototada's estate at Fushimi, forcing Mototada to return there. Meanwhile, Kichiro marches his exhausted army west again to take control of the Tokaido Road trade route. In the aftermath of the battle there, Kichiro learns from a defeated samurai that it was Tokugawa who destroyed his home when he was a baby and murdered his parents. Kichiro, true to the samurai code, remains loyal to Tokugawa and joins Mototada at Fushimi. Here, Mototada confirms the defeated samurai's story. During the ensuing battle, Kichiro escorts the non-combatants to safety but is forced to leave Mototada to fight alone. As the enemy breaches the final defenses, Mototada commits seppuku (ritualistic suicide for the samurai), detailing in his last statement the importance of loyalty. Kichiro joins Tokugawa at Sekigahara. After the Battle of Sekigahara ends in victory for Tokugawa, Kichiro finally changes his mind, abandons his loyalty to his master, and rides away through the war-torn battlefield, forsaking his honor and shaming his family name for generations.

Scenario 1- The Siege of Osaka 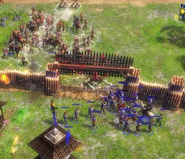 Scenario 5- The Battle of Sekigahara

Flag of Japan during the Tokugawa Shogunate

Flag of the enemies of Act I: Japan
Community content is available under CC-BY-SA unless otherwise noted.
Advertisement