Age of Empires Series Wiki
Register
Don't have an account?
Sign In
Advertisement
in: Age of Mythology, Maps, Age of Empires II, The Forgotten

Acropolis is a random map in Age of Empires II HD: The Forgotten and Age of Mythology.

Acropolis in Age of Empires II HD: The Forgotten is an extremely open map, with players beginning in special hills, with a unique grey texture coloring the slopes. The grey areas of the hills cannot be built upon. The start-up resources for each player is the standard one with 8 Llamas (or Sheep), 2 Boars, a herd of 3-4 Deer, 6 Berry Bushes and normal amounts of Gold and Stone Mines. Some small pockets of forest can be found on the top of the hills, but wood in those areas is scarce.

Outside the hills, resources are more plentiful. There is a pond at the center of the map that contains shorefish, and there is a herd of Deer nearby. Around the small pond, there are always palm forests and very small elevations around. Pairs of Wild Boars can be found scattered outside the hills, as well as pairs of Deer. Stone and Gold Mines appear in normal numbers scattered through the map. Aside from the players' hills and the small elevations around the pond, the map is flat and cliffs are absent.

Wild predators are present scattered outside the hills, as well as the Relics, which come in normal numbers.

The hills provide the players some defensive advantage by using the bonus hill attack in their favor, but as the gray terrain on the slopes prevent players from building on them, walling and performing an early Turtle may be difficult. However, placing Towers and Castles, and make use of ranged units, can prove useful for a successful defense of the hills.

Resources aside from the start-up are scarce on the top of the hills, so eventually, players will have to descend the hills to gather more resources. Booming early is probably not the best option in most games.

The map is pretty open, so early rushes are a good option on Acropolis. Unlike Arabia, microing the troops may be important in order to avoid arrow-fire coming from upper hill.

Acropolis also features in Age of Mythology. Players all begin with one Town Center located at the top of a private acropolis, which is an area of higher altitude than the rest of the map. This map is ideal for defensive gods as the acropolis is mainly made up of cliff terrain, which cannot be walked up. The only access to a player's base is through two passages, one facing towards the center of the map, and one on the opposite side, which makes attacks much more predictable. Both passages are also guarded by two Sentry Towers, which when upgraded can deter early game raids, and are relatively narrow, making them easy to wall off. Ra and Isis players benefit the most from this map as their Towers upgrade automatically upon advancing to the Classical Age and they have access to the Roc myth unit that can bypass any obstacle.

Players begin with slightly more resources than normal, which can allow a faster advancement to the Classical Age. The acropolis supports a small forest, one Gold Mine, some Goats and a second Settlement. These resources will not last long and players will be forced to leave the safety of the acropolis to get more of them. The valley below provides additional settlements, Berry Bushes, Deer and more forests, the latter of which are located primarily around the map’s perimeter. There is also a small a pond at the center of the map which may support a few schools of fish.

Most buildings can be built atop the acropolis to keep them out of reach of enemy attacks. However, if they are built too close to the cliff edge, they can still be hit by archer or siege attacks. Gaia players will have to plan their building placements even more carefully as the lush that grows from their buildings may overlap on the cliff terrain, creating new access points for the enemy. 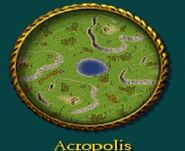 A Greek city sitting atop an acropolis in Age of Mythology
Community content is available under CC-BY-SA unless otherwise noted.
Advertisement