Challenging a Thalassocracy
A Dangerous Mission is the third scenario of the Suryavarman I campaign in Age of Empires II HD: Rise of the Rajas. It is about the attempt by Khmer envoys to deliver the Grand Chariot safely. This is the only scenario in this campaign where the player is unable to construct any buildings.

As the empire boomed, its neighbors became wary. A growing tiger will gorge itself on the prey that it deems most vulnerable.

Some dreaded the looming war and prayed that their fears were unjustified. Others prepared for it. The Kingdom of Tambralinga, a vassal of the great Srivijayan thalassocracy, felt particularly threatened.

The empire was surrounded by hostile neighbors and conflict was imminent! It seemed that the only thing left to question would be who would strike first. Suryavarman was wise enough to know that passivity would only lead to disaster.

The various Burmese kingdoms to the west of the empire behaved with hostility, but a potential ally lay beyond. The Cholas, a powerful dynasty based in the south of the Indian subcontinent, had interests that aligned with those of the Khmer.

Dispatching a diplomatically skilled envoy laden with gifts could be enough to convince Rajendra Chola that an alliance with Suryavarman would be to his liking.

Choose any two groups of soldiers for 100 gold a piece. It is advisable to take the group containing Ballista Elephants. On easy difficulty you get a Priest. On moderate and hard difficulty, you'll have to manage without any kind of healing because you don't get a Priest. Your envoy though can regenerate because he is a hero unit, and should therefor be used as a tank. Go to Dock to the south west. Kill anyone you encounter along the way. Board your Transport Ships. Use the Demo Ships and Fire Ship to clear the way up the river. Unload your troops on the left side of the river about 3/4 of the way up. The map at the top right side of this page shows you where it is. As soon as you unload, go as far south as possible. Fight the small groups of enemies and heal after each encounter. Then stay as far west as you can while moving north toward the green area (you should be going diagonally). Once you've beaten those 4 groups of enemies and can go northwest no more, go northeast and then west (around the trees blocking you) and fight the last group of soldiers. If you kept at least one Ballista Elephant alive, use it to cut the treeline and avoid this last battle! Once they're dead go to the green area to win.

Despite the hardships of the journey though hostile territory, the diplomatic convoy arrived in Chola lands largely intact. Rajendra Chola was pleased with the gifts that the envoy lavished upon him.

Especially impressive was the grand chariot, a work fashioned by the finest craftsmen in Angkor! Generous offerings and well-chosen words go a long way with a magnanimous ruler.

A bargain was struck, and the envoy returned to Angkor, harbinger of pleasant news. 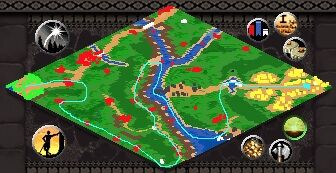 Recommended path the player should take.
Add a photo to this gallery
Retrieved from "https://ageofempires.fandom.com/wiki/A_Dangerous_Mission?oldid=314457"
Community content is available under CC-BY-SA unless otherwise noted.